The way the Depth First Search goes is really like solving a maze. When you see a maze in a newspaper or a magazine or anywhere else, the way you solve it is you take a path and go through it. If you find any junction or a crossroad, where you have a choice of paths to choose, you mark that junction, take up a path and traverse the whole route in your brain. If you see a dead end, you realize that this leads you now where so you come back to the junction you marked before and take up another path of the junction. See if that is also a dead end, else you continue to explore the, puzzle as this route contributes in reaching your destination. Well, at least that’s how I solve a maze. But… I hope you get the idea. You pick up a path and you explore it as much as possible. When you can’t travel any further and you haven’t yet reached your destination, you come back to the starting point and pick another path.

In code, you do this by recursion. Because of the very nature of recursion. Your recursion stack grows-grows and eventually becomes an empty stack. If you think for a while you can notice that the way of traversing which I told you above is logically covering only the vertices accessible from a given vertex S. Such traversal can be implemented using a single function that is recursive. But we want to explore the whole graph. So, we will use another function to do this for us. So, DFS is a two-functions thing. We will come back to the coding part later. Now, DFS too can be listed out in a step-by-step process –

Now, how do you tell if a vertex wasn’t visited earlier…? If it has no parent vertex assigned. So what you have to do when you visit a node is –

The working of DFS is pretty clear from the picture. Notice how we would assign the parent vertices to each vertex. Once we have visited all the vertices from a given initial vertex V1, we backtrack to V1. What do we really mean by this “backtrack” here is that the recursion control will gradually come back to the function that started explopring from V1. We will understand this once we put DFS in code. And one more thing, whenever we got a choice of going to two vertices from one vertex, we preferred going to the vertex with the greater number. Why is this…? This is because we will be following Head Insertion in our Adjacency Lists to have O(1) Insertion operation. Now, assuming that we insert the vertices from Vertex 1 to Vertex 10, the greater number vertices will end up being in front of the Linked Lists. Take a moment to understand this. Even if you don’t understand, it’s ok…! You will get the hang of it later. Why I really did that was to explain you the concept of Edge Classification. 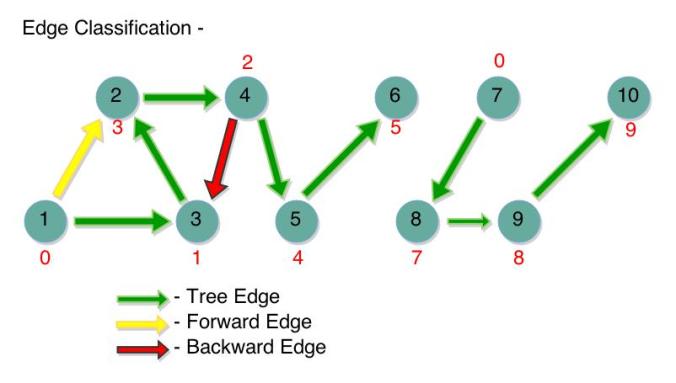 As you can see there are three types of edges, in fact, there are 4 actually. They are –

Cycle Detection – Using DFS, we can detect if there are any cycles in the given graph. How…? This is very simple. If there exists at least one backward edge, then the given graph will have cycles. Well, telling how many cycles would be there for given number of backward edges is a challenge. But the point is if there is a backward edge, there is a cycle. This is by the very definition of the Backward Edge. It is an edge from a descendant to an ancestor. If we have a backward edge, then there will surely be another path of tree edges from the ancestor to descendant, forming a cycle. The picture below should make things clear.

Now try to code the DFS, it is basically a recursion process. If you are good with recursion, I’m sure you can get this. Nonetheless, I have put my code below –

The code above has an additional feature. It prints out the Backward Edges. This is done by the technique explained above, implemented using an integer array. I know it is a dirty way to use an integer array for this, it consumes way too much space. It really needs to be a Boolean array, because we use on two values, 0 and 1. But I wanted to keep my code strictly in C, so I used an integer array. This is the Depth First Search Algorithm. It has a time complexity of O(|V| + |E|), just like the Breadth First Search. This is because, we visit every vertex once, or you could say, twice, and we cover all the edges that AdjacencyList[Vi] has, for all Vi ∈ V which takes O(|E|) time, which is actually the for loop in our depth_first_search_explore() function. DFS is not very difficult, you just need to have experienced hands in recursion. You might end up getting stuck with some bug. But it is worth spending time with the bugs because they make you think in the perfect direction. So if you are not getting the code, you just have to try harder. But if you are having any doubts, feel free to comment them…! Keep practicing… Happy Coding…! 🙂

More in the Navigation Page ! →

Hello people...! This is Vamsi Sangam. I was studying B.Tech IT, 2nd year in Indian Institute of Information Technology, Allahabad, when I started this blog. I hope it helps you...! Happy Coding...! ☺